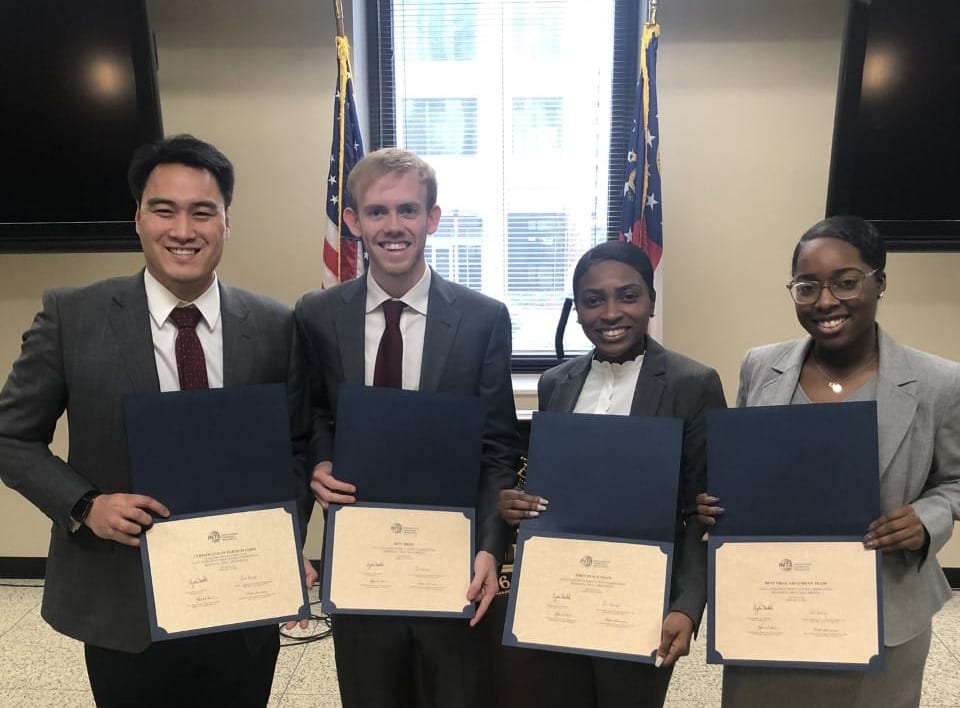 The regional competition took place at the DeKalb County Courthouse, where the three competitors delivered 20-minute oral arguments in front of three-judge panels. Panels were made up of Atlanta trademark attorneys ranging from associates to senior partners—several of whom were counsel on the very cases that the team was citing in their brief and oral arguments.

The GSU team has worked since December in preparation for the regional competition. Viger, Walker and Watkins worked tirelessly after their fall semester finals and through the winter break to submit their award-winning brief in early January.

Soon after that, they met four times a week along with Foo to prepare their oral arguments. Other members of the Georgia State Moot Court team helped the competitors hone their arguments and delivery for the regional competition. The team was also generously supported by intellectual property lawyers at the Atlanta office of Finnegan, Henderson, Farabow, Garrett & Dunner, including GSU Moot Court alumna Brooke Wilner.

The national competition will take place on March 21 at the Court of Appeals for the Federal Circuit in Washington D.C. The team will present 30 minutes of oral arguments before members of the Trademark Trial and Appeal Board and the United States Patent and Trademark Office. They will compete alongside the second place team from Atlanta as well as the top two regional teams from Chicago, Dallas, Los Angeles and San Francisco.

In preparation for finals, the team has maintained their steady practice schedule, including argument “workshops” where they have worked intensively together to develop and refine persuasive and practical arguments.  The team looks forward to spending time in the nation’s capital and representing the Georgia State community on the national stage!