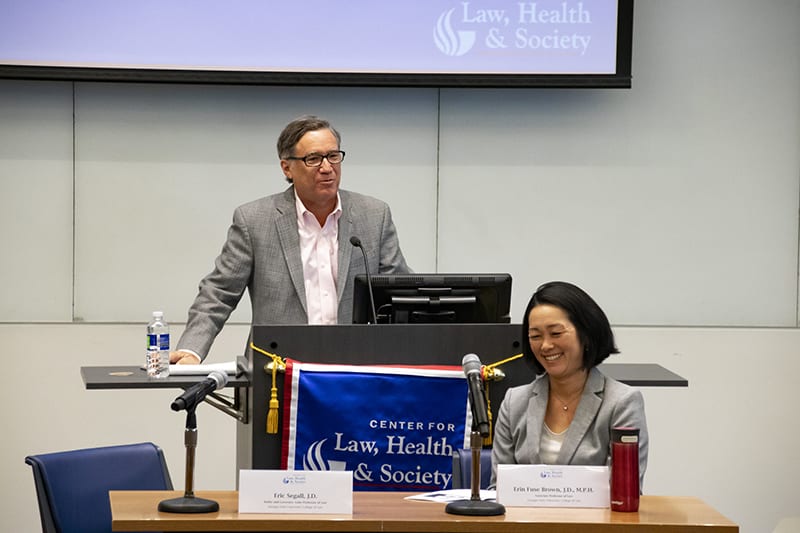 In September, the Center for Law, Health & Society at Georgia State Law hosted a discussion on the Affordable Care Act and the Texas v. U.S. case. Eric Segall, Kathy and Lawrence Ashe Professor of Law, and Erin Fuse Brown, associate professor of law, led the conversation.

Title I of the ACA was designed as a “three-legged stool”: 1) health insurance non-discrimination for pre-existing conditions, 2) the individual mandate requiring nearly all people to have health insurance or pay a penalty, and 3) subsidies to make health care affordable. According to the professors, the ACA has faced several legal challenges to knock out legs from the stool.

The U.S. Supreme Court found in NFIB v. Sebelius in 2012 that the penalty for not having health insurance was constitutional as a tax. In 2017, Congress reduced that penalty to $0, effectively ending the individual mandate.

“While there has been a slight decline in enrollment in the marketplace from 2018 to 2019, lack of enforcement of the individual mandate didn’t topple the stool,” said Fuse Brown.

The ACA faces a new challenge in Texas v. U.S., filed in 2018 by two individual plaintiffs, and joined by many Republican-led states. Judge Reed O’Connor (N.D. Tex) found that, without the penalty, the individual mandate is unconstitutional and that it is inseverable from the ACA, so the entire law must be struck down.

“Legal scholars on both sides agree the plaintiffs suffered no injury for being hit with a $0 penalty for not buying insurance they did not wish to buy,” said Segall. However, on December 18, the Fifth Circuit found standing.

The Fifth Circuit agreed with the District Court that the individual mandate is unconstitutional, but rather than striking down the entire law, punted the issue of severability back to the lower court. “It’s hard to imagine the District Court will reach a substantially different conclusion about severability the second time-around,” said Fuse Brown.

The House of Representatives and Democrat-led states unsuccessfully petitioned the Supreme Court for an expedited review of the case. The Trump administration and Republican states have urged the Supreme Court to wait. Although the Court could still hear the case, it likely won’t be resolved before the 2020 election.

“If the ACA is struck down, would we revert to pre-ACA rules? The stakes in the case are very high,” said Fuse Brown. According to the Kaiser Family Foundation, striking down key portions of the ACA would result in an increase of 20 million uninsured.

The fate of the ACA remains in limbo, and without the Supreme Court for clarification, it will continue to cast a pall of uncertainty over the health care industry and worry voters as they head to the polls next November.