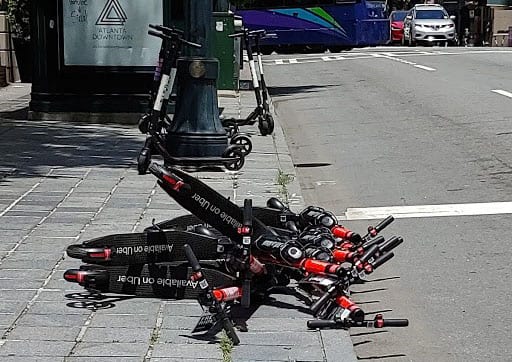 Last spring, hundreds of electric scooters suddenly arrived in the City of Atlanta. They could be spotted all over downtown and Georgia State’s campus, providing fun, fast short distance trips while simultaneously creating havoc as they whipped across roads, buzzed by pedestrians, and blocked sidewalks. Some cities have banned e-scooters. However, others are embracing them as a solution to the “last mile problem” associated with public transit while regulating them.

“The City of Atlanta’s ordinance is designed to strike the appropriate balance between the need in urban areas for forms of ‘micro-transportation’ that reduce traffic and pollution and the interest of cities in protecting their citizens from the unintended consequences of the new technology,” he said.

Grady Health System estimates that it sees 20-30 riders and pedestrians per month with injuries ranging from facial lacerations to broken bones to head injuries. The new ordinance’s provisions for riders, including limiting speed, prohibiting riding on sidewalks and restricting parking, are designed to prevent accidents. The ordinance requires e-scooter vendors to obtain permits and establishes fees and fines. Vendors must submit equity plans to promote access to residents of underserved neighborhoods, and explore alternatives to smartphones and credit cards for rental. Vendors must also share data about use that can be used to improve city planning.

Karen Johnston, Metro Growth’s associate director, and Stacie Kershner, associate director of the Center for Law, Health & Society, are now collaborating with Georgia State and Georgia Institute of Technology researchers to examine the impact of the City of Atlanta’s new ordinance on equitable access and injury prevention and compare it to those of other U.S. cities.